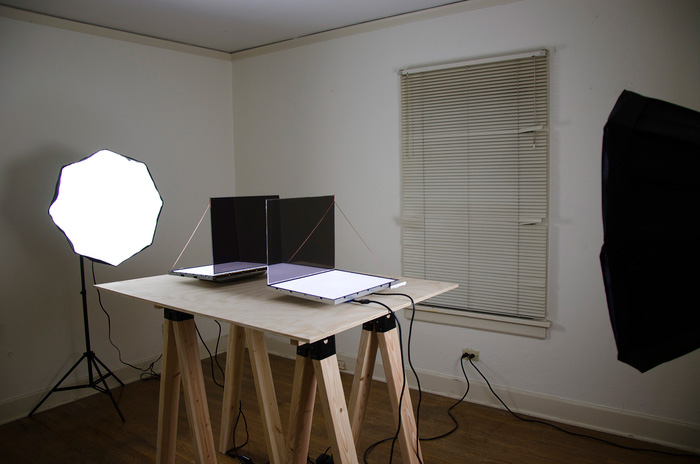 PUNCH enthusiastically presents our seventh Juried Exhibition. A total of 313 artists submitted 1,075 entries. Trophies and awards will be announced at the opening reception on November 5 at 7 p.m.

Juror
Julia Fryett
Founder, Aktionsart, Seattle, WA
Julia is a curator and cultural entrepreneur focused on art, film and technology. Based in Seattle, she works to cultivate engaged communities who think creatively and critically about technology and digital culture. She fuses the arts, emerging technologies and entrepreneurial business methodologies to develop visionary projects that drive social innovation. Julia is the founder of Aktionsart, a new art and technology nonprofit, where she oversees strategic partnerships and curates nomadic programs including Black Box Festival.

With over ten years of international experience, Julia has served as an arts advocate on Steering Committees for Americans for the Arts and Obama’s 2008 National Arts Policy Committee. She advises private collectors and worked in a curatorial and sales capacity for four years at the Mugrabi Collection in New York City.

Julia received a BA in Literature, a BA in Public Policy Studies and Music Minor from Duke University. She focused her research on arts policy and nonprofit management through the Leadership and the Arts Program at the Duke Sanford Institute of Public Policy. She holds an MA in Film Curating from London Film School and a certificate in Transmedia Production from the Media Academy Wales.

Kevin Bell
Kevin Bell’s work is informed by experiences growing up in the western United States, including ten years as a backcountry ranger and guide in Alaska, and eight years in Montana. He earned a BA in history from Bowdoin College, and completed an MFA in painting from University of Oregon. His artwork is exhibited nationally and internationally, including recent shows in Hong Kong, Hamburg, Seoul, Dublin, Vancouver B.C., Shenzhen, Houston, New York City, San Francisco, and Chicago. His work was included twice in the publication New American Paintings, and featured in art fairs such as SCOPE NY and Art Chicago. He is currently an Associate Professor at The University of Montana and serves as Editor-in-Chief of FATE in Review, a national journal dedicated to college-level art pedagogy.

Catherine Burce
Catherine Burce is an artist living and working in Los Angeles. She received a Bachelor of Architecture from Cal Poly, San Luis Obispo and a Masters of Architecture from Cranbrook Academy of Art. Because of her architecture background, earlier work examined the relationships between people and the spaces they inhabit, but current work reflects her fascination with landscapes. Catherine’s work has been shown in galleries throughout Los Angeles and Detroit, and she is a member of The Los Angeles Artists Association.

Eli Coplan
Eli Coplan is an artist living and working in Portland, OR. His practice is formed across physical and virtual spaces, investigating digital modes of production with an eye toward history and materiality. Eli has shown with Hideout in Vancouver, WA (2015), Surplus Space in Portland, OR (2015), Chin’s Push in Los Angeles, CA (2015), Black Box Festival in Seattle, WA (2015), and recently attended Triple Canopy’s Publication Intensive in New York City (2015). He graduated from Reed College in 2015.

Juequian Fang
Jueqian Fang was born in Jinhua China, 1992. She received her BFA in Photomedia and BA in Cinema Studies from the University of Washington in 2014. Fang is currently based in Seattle, WA.

Michael Handley
Michael Handley is an American artist known for his work dealing with landscape – such as how we learn about and manipulate nature and our environments. Handley grew up in Southern Utah and received his MFA in sculpture from Yale University. His work ranges from sculpture, performance, video, photography, drawing and painting. He lives and works in New York City and Philadelphia.

Jenny Hawkinson
Jenny Hawkinson grew up in the mountain landscape of the Pacific Northwest. Several years ago she transplanted from the Seattle area to Vancouver, B.C.. Her artwork explores themes of loss and forgetfulness, embellished narratives, transience and rootedness, all in relation to different nuances of home. Integral to her process is the use of materials with previous histories: linens and handkerchiefs, family photographs, shotgun shells, and other objects that are the remnants of a collective past. She works in a variety of mediums, including textile and embroidery, collage, small sculpture, photograph dioramas and video.

Hongzhe Liang
Hongzhe Liang was born in 1992 in Yueyang, China. He graduated with distinction from the University of Washington, Seattle with a BFA in photo media. Liang currently works with photography, video, and installation. His work derives from reweighing culture and events that he has been involved in by borrowing metaphorical objects and symbolic creatures.

Holly Ballard Martz
Holly Ballard Martz is a mixed media artist, focusing on painting and sculpture. She earned her BFA in Printmaking from the University of Washington and currently lives and works in Seattle. Her work has been exhibited nationally and is in many prominent collections including the Bainbridge Island Museum of Art. She is the recipient of a 2015 Artist Trust GAP Grant, supporting her upcoming installation Seeking Asylum.

Anna Mlasowsky
Born in 1984 in Germany Anna Mlasowsky has received her BA from the Royal Danish Academy of Arts in 2011. Anna received numerous awards and nominations for her experimental work. She has been an artist in residence at The Creative Glass Center of America, The Toyama City Institute of Glass Art in Japan, The Corning Museum of Glass, Pittsburgh Glass Center and The National University of Sunderland to name a few. Her work has been shown in international competitions and has been included in various Museum collections such as The Corning Museum of Glass, The European Museum of Modern Glass Art and the Glasmuseum in Ebeltoft, DK. She won the UK Glass Prize in 2013, Bullseye category, the Otto Wladrich Preis and the Emerge Silver Award in 2014. Anna is currently an MFA student in sculpture at the University of Washington.

Joshua Noble
Joshua Noble is a designer, artist, and engineer working with at the intersection of code, design, and science fiction. He blends a product design practice and artistic practice, exploring wearable and embodied technology in ways that approach utility while retaining a critical distance. He lives and works in Seattle, Washington.

Barbara Polster
Barbara Polster is an artist investigating themes of human limitation, wonder, and relationship to natural scale, primarily through sculpture, installation, and video. She has had two recent solo exhibitions at the William Busta Gallery in Cleveland, OH. In addition, she has participated in numerous group exhibitions at the University of Michigan School of Art and Design, Prak-sis Gallery (Chicago), Rogue Video and Performance (Newark) and the Cleveland Museum of Art. She was awarded the Museum of Contemporary Art Cleveland Neznadny + Schwartz Visiting Curator Selection. Currently, she is an instructor in the ASUW Experimental College.

Juror’s Statement
I thought about many things while swiping through the 1,075 entries submitted to this exhibition. But mostly, I thought about four things: Aaniscopes, rain forests, Walter De Maria and the Beatles.

1. The Aaniscope, by Joshua Noble, enables its owner to feel electromagnetic field radiation (EMF) – the invisible waves from radios, power lines, wifi signals, bluetooth transmissions and wireless communications that travel through our bodies each day.

2. The quietest place in the United States is believed to exist above a moss-covered log 678 feet above sea level, situated near a singular square inch of silence at 47° 51.959N, 123° 52.221W, in the Hoh Rain Forest at Olympic National Park.

3. In 1977, Walter De Maria installed a grid of 400 polished stainless steel poles in a New Mexico desert, each spaced 220 feet apart, to create his seminal work of Land Art, The Lightning Field. The poles materialize into a living, electric sculpture during a lightning storm. The poles are taller than the average person.

4. Ten years prior, in 1967, John Lennon wrote these words for a song called Strawberry Fields Forever:

The works presented here form an exhibition landscape comprised of electrical and natural fields – charged materials and particles, positive and negative, each dependent on the other. Several objects live between product and sculpture as critical hybrids that conceptualize wearable technologies. The spaces between screens and the distances between data sets are visualized, visibly and invisibly. Informed by the aesthetics of scrolling, loading, browsing and shopping, the gallery becomes a store.

A singular juror statement would not be conclusive, as the works encompass an asynchronous supply of disciplines, formats, concepts and subjects. But here are four more things to think about:

1. Distributed charges at the surface of physical interfaces: the electric shock of The Bracket that signals you have entered a census subarea where the median income is higher or lower than yours, the cathartic charge of your breath on glass, the pressure of a needle